Blog
TrueCommerce B2BGateway / B2BGateway / Omni-Channel / Back In Black – Where Does The Future of Black Friday Lie?
Nov 18

Back In Black – Where Does The Future of Black Friday Lie? 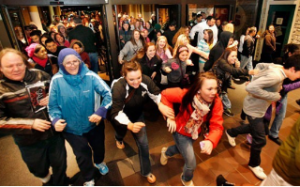 2015 may be a defining year for the future of one of the world’s largest shopping days – Black Friday. To the (very few by now I would guess) uninitiated, Black Friday is the name given to the Friday that falls immediately after Thanksgiving. Traditionally Black Friday has been a retailers Mecca, through ingenious marketing campaigns and heavy discounting, crowds have been lining up outside retail stores from early dawn each and every Black Friday to splash the cash and grab a bargain.

The Black Friday annual shopping day has become so huge, that some large retailers in recent years have even begun opening their doors on the Thursday of Thanksgiving. However, this has not gone down well in all quarters, with many protests outside the shop doors lamenting retailers putting profit before the quality of family life for their employees. These lamentations have gained ground, and for the first year ever, some retail giants such as REI have bucked the trend and have stated that none of their stores will open on either Thanksgiving or Black Friday 2015 – a kind of a give back and thanks to their employees (not to mention tonnes of wonderful publicity headlines).

But it’s not just the feel good factor that may come into play for the future of Black Friday, according to BlackFriday.com the number of people who shopped both instore and online fell from 46% to 41% between 2013 and 2014. BlackFriday.com also states that the average spend per head by the Black Friday shopper has fallen steadily from $423 to $381 b3etween 2012-2014.With the comfort of online shopping, no queuing or waiting, new pretenders to the throne such as Cyber Monday and Singles’ Day in China, what does the future for Black Friday hold? My guess is that it is not a tradition that is going away, but rather like the omni-channel has changed the future of retail, it is a tradition that will have to be re-invented and upgraded. In this regard, I believe that the whole weekend comprising of Thanksgiving, Black Friday to Cyber Monday will become one huge festive splurge, be it instore, online or a combination of both.